Kite flying is a harmonious blend of culture, art and science and almost everyone at sometime in their lives has found enjoyment and pleasure when flying a kite. Most still regard a kite as a child’s toy and know very little about its origins and fascinating history.

Kites have been in existence for nearly 3000 years and have given pleasure to millions of people over the centuries. Kites have been used for religious and ceremonial occasions, fishing, man-lifting, life-saving, signalling, pulling vehicles and even scientific experiments. It was also the kite which led to the development of one of mankind's greatest inventions, that of the aeroplane.

It's thought that kites were first introduced into Japan by Buddhist missionaries who travelled from China in the Nara period (649-794 AD) and were mainly used in religious and thanksgiving ceremonies.

The Japanese absorbed much of the Chinese culture but they developed their own distinctive kite designs and traditions.

The origins of the name

A Japanese dictionary dated 981 AD was the first to record the Japanese word for kite and used the characters for "Kami Tobi" meaning paper hawk, which suggests that the first kites were bird shaped.

The popular name now for a Japanese kite is 'Tako' - thought to be a play on the name 'Tokyo', where kites were very popular. The Japanese even have a word in their vocabulary 'Tako-Kichi' which means 'kite crazy'.

They were used from earliest times for practical purposes such as in the construction of many shrines and temples in Japan where large kites were used to lift tiles and other materials up to workers on the roof tops.

An early example of man-carrrying was told of a 12th Century warrior Minamoto-no-Tametomo who was exiled to an island along with his son and saddened by his son's lonely existence constructed a large kite on which he made his escape to the mainland.

A Japanese thief used a man-carrying kite to steal the gold scales from an ornamental dolphin on the roof of the Castle of Nagoya and was only caught because he bragged of his daring deed. He and his family were boiled in oil.

It was in the Edo period 1603 - 1867 when Japan was closed to all foreigners that most of the beautiful Japanese kites we know today were developed. There are about 130 different styles and types of kites, each region having its own unique shape. They are normally decorated with characters from Japanese folklore, mythology or have some religious or symbolic meaning. All are painted with bright coloured natural dyes, sumi (black ink) and constructed from washi paper (hand made paper) and bamboo or where bamboo if difficult to grow cypress wood is used instead. The bamboo frame is called the bones and the paper covering is known as the skin. 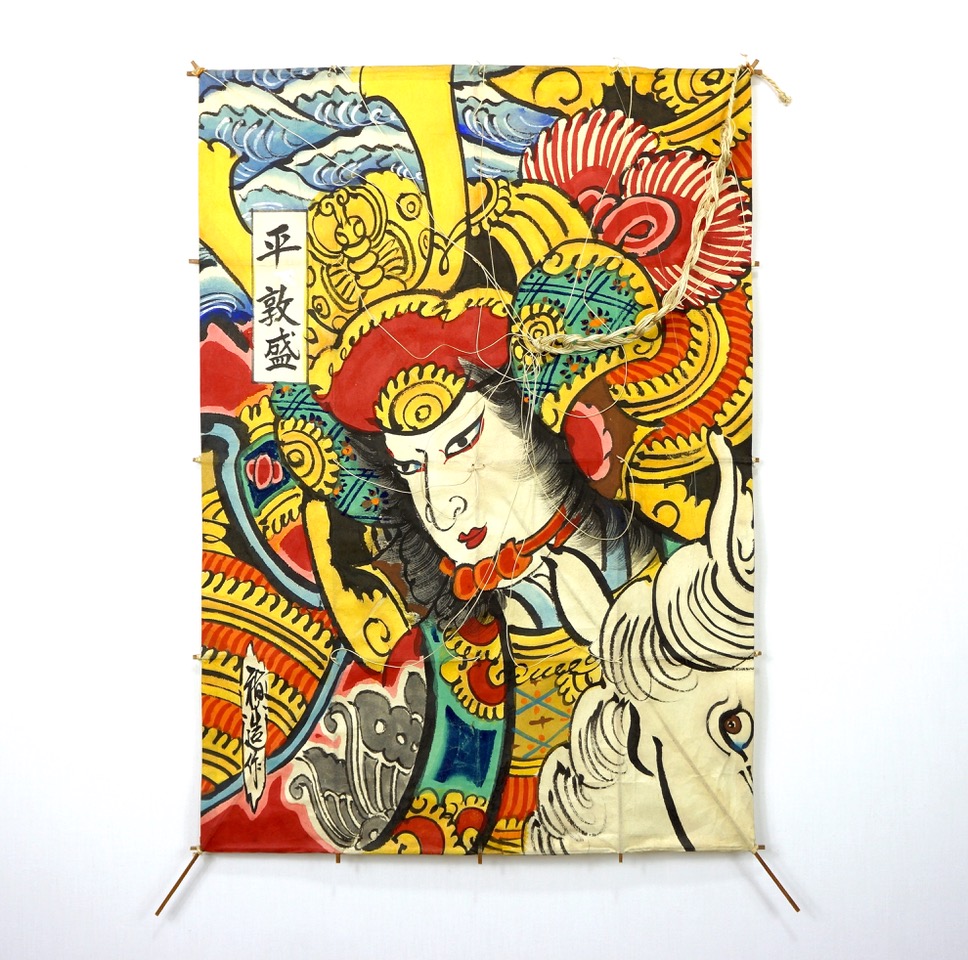 The Edo kite is one of the best known Japanese kites and takes it name from Edo - the old name for Tokyo. Its design is rectangular and multi bridled with elaborate and detailed paintings of famous warriors, Kabuki actors, priests and geisha girls. The majority are painted in the Ukiyo-e style which is a reference to the very popular woodblock pictures of the mid 18th century.

Traditionally kites are flown on boy's day May 5th, (the 5th day of the 5th month) at religious festivals, public holidays and New Year. At Harvest Festival kites are flown with stalks of rice attached as a symbolic offering of thanks for a good crop. Others are decorated with the face of a demon and would act as a talisman against evil. One of the most famous kite festivals is Hamamatsu where kite teams battle against each other whilst over 2,000,000 spectators look on.

Congratulation kites are still given to first born sons. Kites with paintings of folk heros or gods are believed to protect and guide the new-born child into adulthood, Fukusuke the large headed dwarf will bring good luck and some carry long life symbols such as the crane or tortoise, The most popular design is Kinorta - a small boy who was left by his parents in a mountain forest and raised by bears - he grew up to be wise and very strong. Kinorta is often painted with a carp, another symbol of strength and bravery because the carp must swim up stream against the current to lay its eggs. 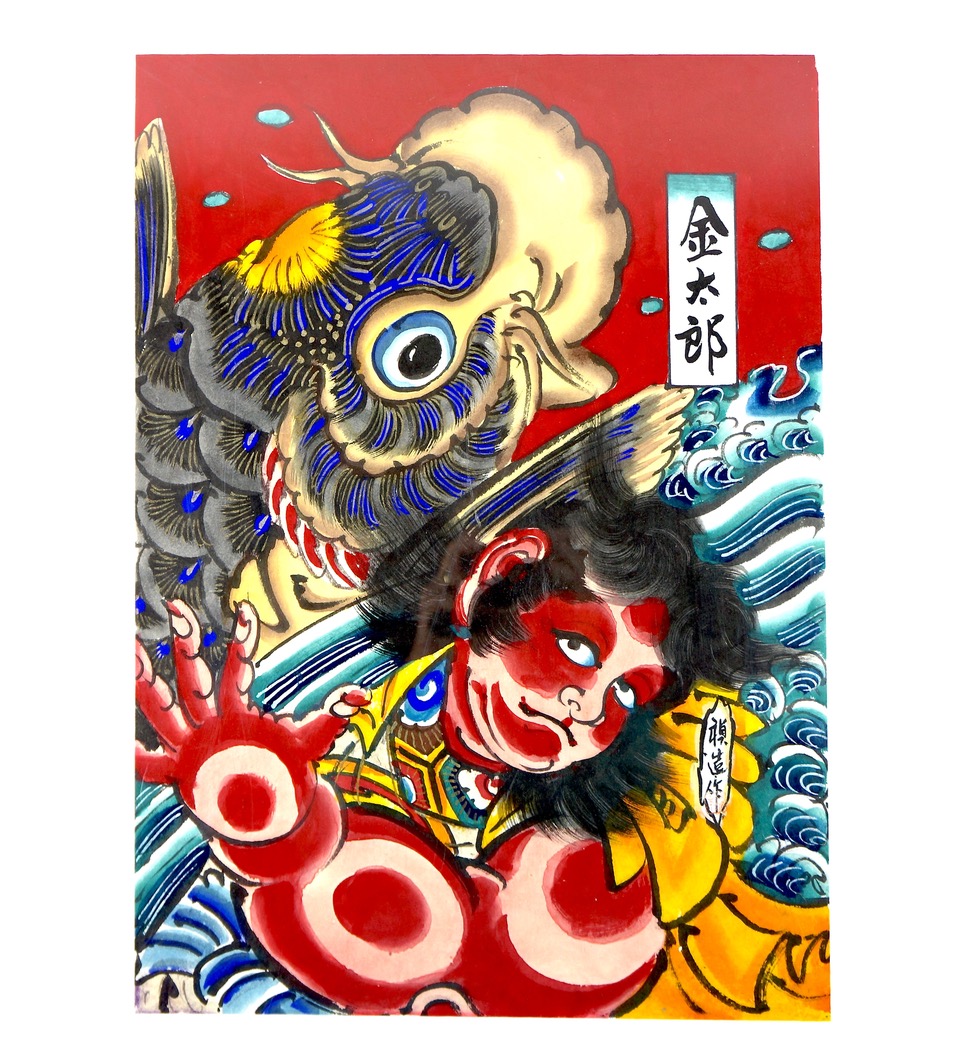 Tiezo Hashimoto was one of the most famous and last professional kitemakers in Tokyo. He was made a living National Treasure for his work in the traditional arts. Like most Japanese artists he always left the painting of the pupils of the eyes until last. The picture is not considered to have life until they are added. His wife was responsible for wrapping a thin piece of paper around the bamboo spars in order that the paper sail (the skin) would stick firmly to the frame (the skeleton). This is the sign of a well made kite.

In 1976 I had the pleasure of visiting them in their workshop and was very honoured to be able to see them making their beautiful Edo kites. Sadly he died in 1991 aged 87 and his kites are now highly prized by collectors. Like most Japanese kites, Edo kites are flown without tails. A commonly held belief in Japan is that if a kite requires a tail in order to fly it is not well designed - although in strong winds tails are added.

Kite apprentices had to train for approximately 4 to 5 years without pay. It took 2 to 3 years just to learn how to draw a straight line and circles with a brush correctly. It is mainly the hobbyists who make and fly the traditional kites nowadays. 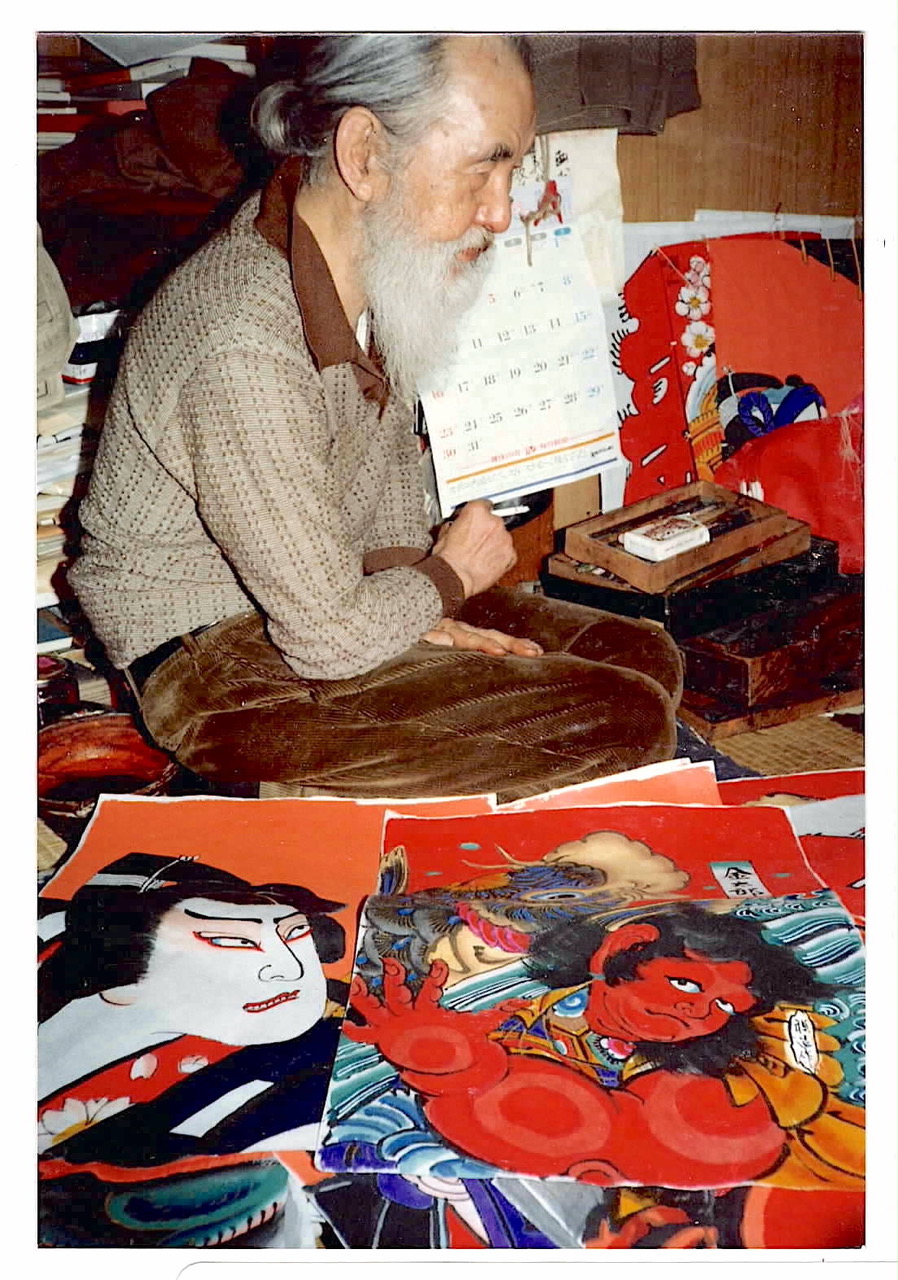 Kites of all sizes

Very big kites have always held a fascination for the Japanese and there are still a couple of very popular kite festivals in Japan where giant kites are flown. During the 2nd week of June two teams from the city of Shirone battle against each other from opposite banks of the river with kites measuring 7 metres x 5 metres. When they crash or are dragged into the water the paper covering becomes very wet and along with the bright paint pigments dissolves, making the water a wonderful colour, leaving only a skeleton bamboo frame. 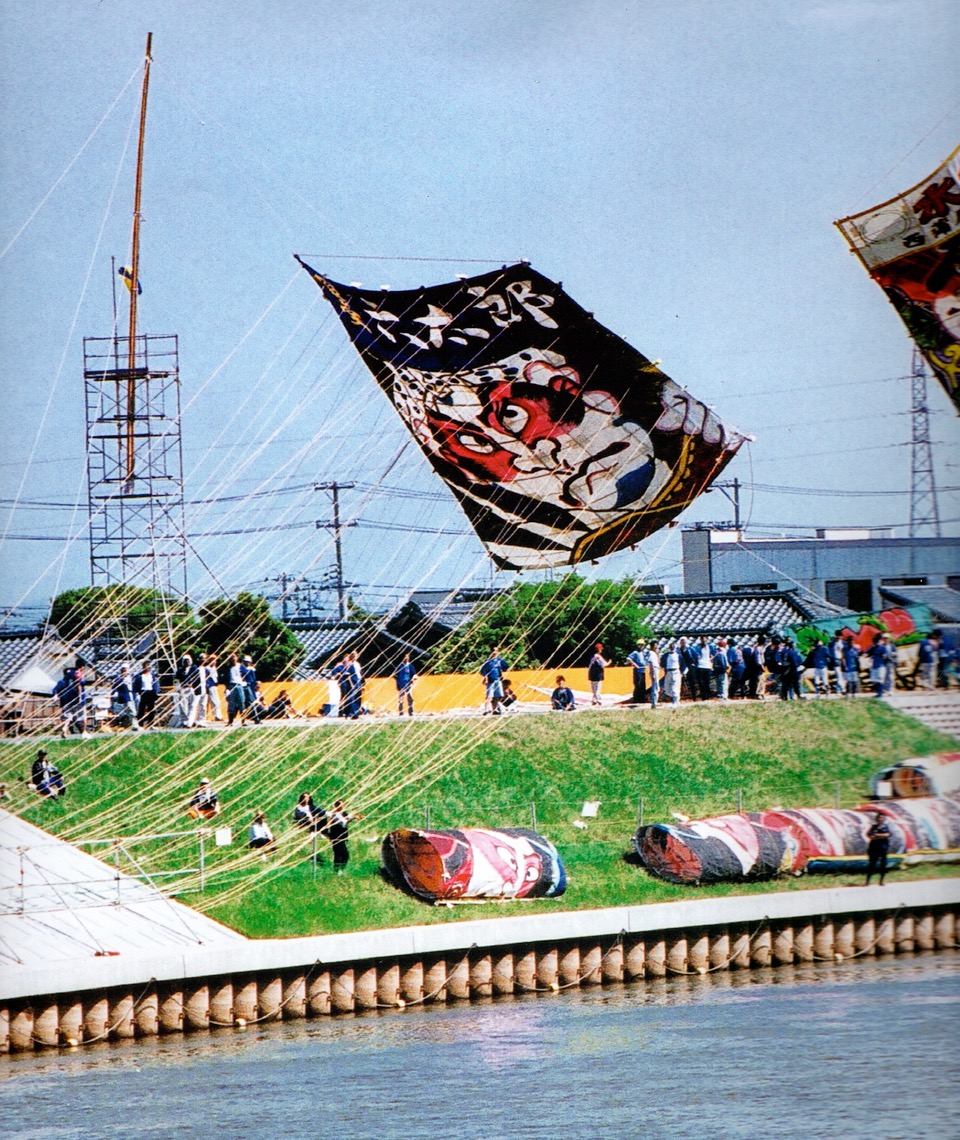 One of Japan's largest kites was the Wan Wan kite with an overall width of 24 metres. One kite made in 1914 weighed 2.8 tons and required 150 - 200 men to fly it. The tails were 500 feet long and like the flying line were made from the anchor ropes of ships. Sometimes the winds were too strong to pull them in and had to be left anchored until the wind subsided allowing the kite to come down of its own accord. Sadly the large Wan Wans are no longer made.

The largest kites flown today are in Hoshubana on Boys Day - May 5th. Approximately 200 years ago the local Buddhist Priest told the local farmers that if they flew kites in the sky (where the rain, wind and lightening came from) this would please the Gods and have a calming influence on the weather and would make it kinder for their production of silkworms.

The farmers made small kites at first and as their yields grew bigger year by year making them more prosperous the kites grew too. They now make large kites over 15 metres high and 11 metres wide weighing over 800 kilos. These kites take 1500 sheets of paper to cover and need over a hundred people to carry and fly them. This kite is called (because of its size) the "100 Mat Kite" (the Tami Mat is the standard size floor mat used in every Japanese home.

Besides making some of the largest kites in the world the Japanese also have a fascination for miniature kites and for hundreds of years have been making small kites some of which are only a few mm high. Retired Samuri Warriors used to make very small kites from straw and tissue paper and fly them over the rising air from hot cooking stoves. 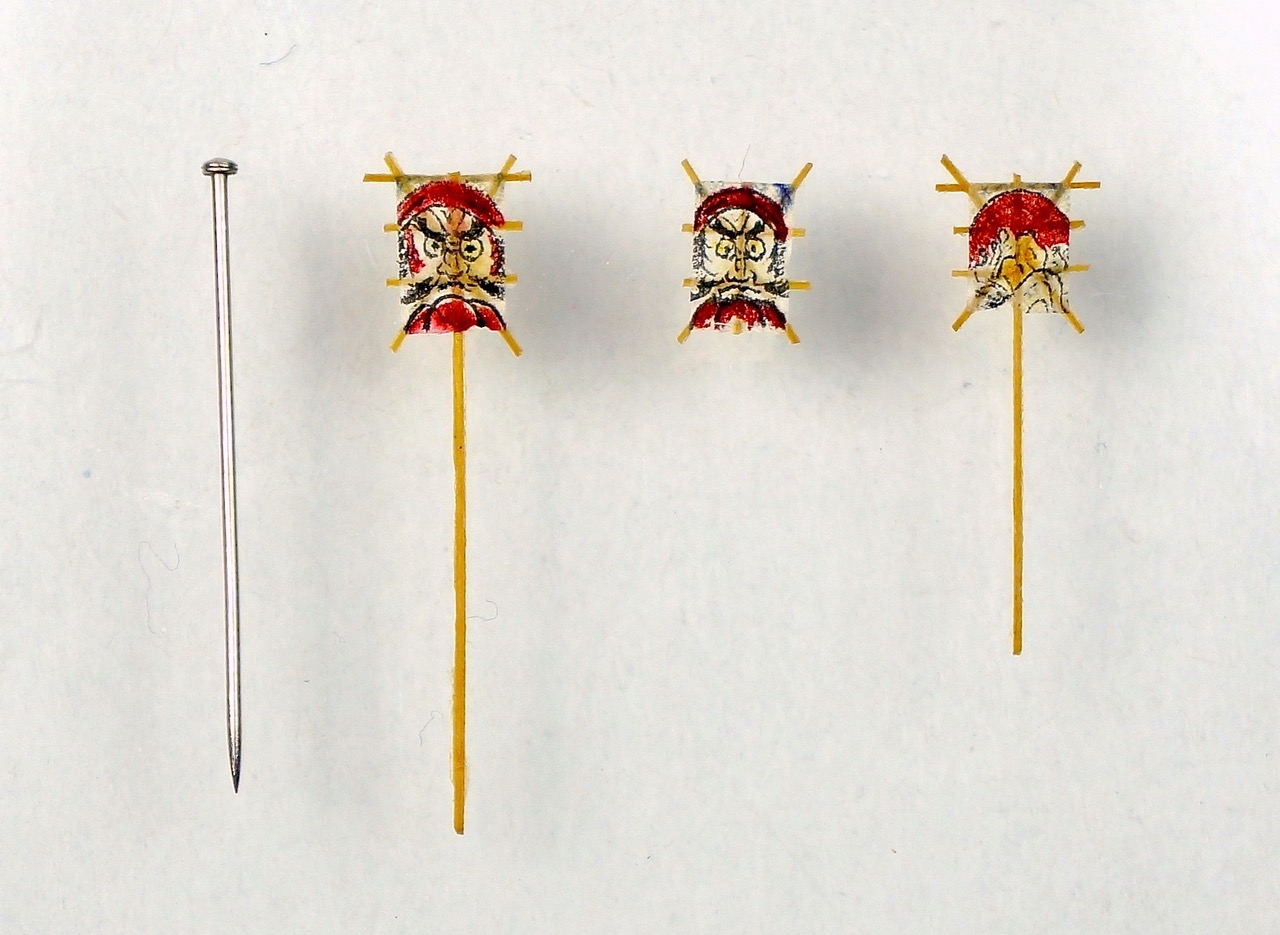 The future of kites in Japan

Sadly kite flying is on the decline in most parts of Japan due to so many high buildings and overhead power cables. You would now have to drive out of Tokyo for over 2 hours to find a suitable place to fly a kite. The old Kite Masters are dying and their sons and daughters are not prepared to work the long hours with poor pay. They want to become engineers or work in the city.